United States Bowling Congress Hall of Famer Liz Johnson of Deerfield, Illinois, just bought a house and is in the process of permanently relocating from New York to Illinois, and she’ll now need to make some room in her new place for a couple more trophies.

The 43-year-old right-hander (above) defeated Poland’s Daria Pajak, 188-176, to win the 2017 U.S. Women’s Open at Plano Super Bowl in Plano, Texas, on Sunday, marking the fourth consecutive time, and sixth time in her career, she has claimed the coveted green jacket.

The win, which was broadcast live on CBS Sports Network, was the record 10th major victory of her career and second of the season. She earned $20,000 for the win, and Pajak took home $10,000 for the runner-up finish. 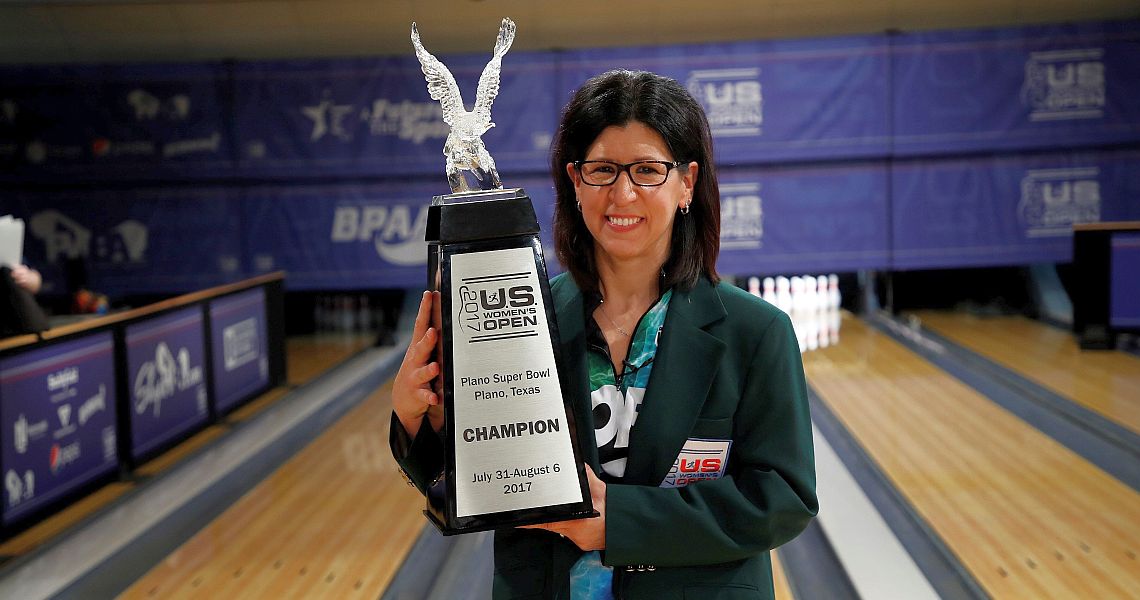 On the way to the win Sunday, Johnson threw two doubles to stay head of Pajak, who rolled a pair perfect games and averaged more than 229 this week to earn the top seed for the championship round.

Johnson needed just two pins in her final frame to secure the win and sealed it with a six-count on her first delivery.

She now is a formal trophy presentation away from her third consecutive PWBA Player of the Year award, which is based on competition points from the 13 of the season’s 14 events.

“It’s probably cliché, but it’s a dream-come-true season,” said Johnson (left), who was the runner-up to Latvia’s Diana Zavjalova at the 2017 USBC Queens in May.

“I never could’ve thought about winning two majors and finishing second in the third one, along with the possibility of a third player of the year, and I can’t put into words the season I’ve had. With all the talent we have out here on the Tour, to be in the position I’m in is the best feeling in the world.”

Johnson entered Sunday’s live TV finals as the No. 5 seed and defeated four talented young players to climb the ladder for the second consecutive year.

“Climbing up the ladder always is tough, and a couple of times I thought there was no way it was going to happen,” Johnson said.

“I was close early and then found my look, but in the third match, I lost my feel a little bit. I had to take a step back mentally, take some deep breaths and just focus on making better shots. It was a little more of a grind today than we saw during the week, and that’s when experience really helps. Sometimes, you have to expect the unexpected.”

Pajak (right) was looking to become the first international player since 1982 to win the U.S. Women’s Open. Japan’s Shinobu Saitoh was the first and only to do so, defeating USBC Hall of Famer Robin Romeo, who went on to win the event in 1989.

Pajak is in contention for the 2017 PWBA Rookie of the Year Award, which will be decided at the season-ending Smithfield PWBA Tour Championship, the fourth major on the 2017 PWBA Tour schedule and an invitation-only event that features eligible champions and the top point-earners from the current season.

The 24-year-old right-hander earned a spot in the PWBA Tour Championship with a win at the recent PWBA Greater Detroit Open, the first title of her PWBA career.

“I lost to the best bowler in the world, ever,” Pajak said. “Liz is probably – not probably, she is the best bowler in the world. I could never take advantage of the fact she was missing a little bit. I’m upset that at the time I really needed to carry, I didn’t, because I felt that could have changed the game. I don’t like losing in the ninth frame, but it is what it is.” 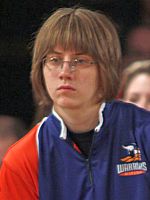 On the way to the seventh U.S. Women’s Open championship match of her career, Johnson needed to fill 15 pins in her final frame to get past Team USA member Erin McCarthy (left) of Omaha, Nebraska.

Johnson left, and converted, the 3-6 combination on her first offering and then tossed a crossover strike to earn a spot in the final by a 199-195 margin.

Throughout match play this week at Plano Super Bowl, McCarthy suffered from severe back spasms and was unable to sit during the match.

She led by 26 pins after five frames, before missing a 3-10 split in the sixth frame slowed her momentum and allowed Johnson to take the lead with strikes in frames seven through nine.

The semifinal between Johnson and McCarthy was rematch of the title tilt at the 2015 USBC Queens, where Johnson defeated McCarthy, the top seed, to win her second Queens tiara. 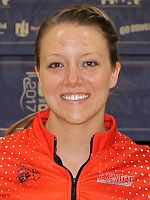 Prior to meeting with McCarthy, Johnson found herself down nine pins at the halfway point of her match against Canada’s Valerie Bercier (right), but she tossed six consecutive strikes, starting in the fifth frame, to outdistance the former University of Nebraska standout, 255-223. 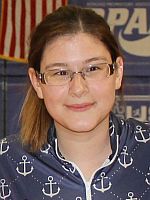 Back-to-back splits from Trudell in the seventh and eighth frames, including a 7-10 in the latter, proved to be her undoing, despite Johnson leaving, and missing, a split of her own in the final frame.

The 2017 U.S. Women’s Open started with 114 competitors, who each bowled 24 games of qualifying over three days before the field was cut to the top 38 for Friday’s eight-game cashers’ round.

The 32-game pinfall totals determined the 24 bowlers for match play, while their 56-game totals, including 30 bonus pins for each win, decided the five players for the TV show. There were 10 perfect games this week, with Pajak (two) and Johnson among them.

The championship round of the U.S. Women’s Open was one of four finals contested Sunday at Plano Super Bowl.

The finals of the 2017 PWBA Orlando Open, PWBA St. Petersburg-Clearwater Open and Nationwide PWBA Rochester Open were taped for broadcast on CBS Sports Network on Aug. 15, Aug. 22 and Aug. 29, respectively.

All qualifying and match play rounds of the 2017 U.S. Women’s Open were broadcast live on Xtra Frame, the online bowling channel of the Professional Bowlers Association. For more information on the U.S. Women’s Open, click here.